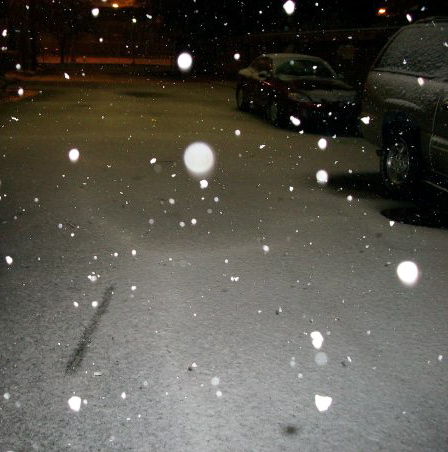 This Jersey girl spent Friday night watching it snow, YES, snow in Charleston. The first accumulative snow the Holy City has seen since 1989. I watched what began as cold rain turn into sleet. I sat outside listening to the sleet as it ricocheted lightly off of windows, cars and trees, waiting. When the sleet began changing into snow, I sat motionless, wondering how long it could last.

When it became clear that the snow meant business, I walked inside and spent the evening on the couch in front of my picture window. For hours I watched the snow in wonder and disbelief. Watching snow cover palm fronds is quite a sight to see.

I’ve been away from New Jersey winters long enough to forget the absolute hush that comes over the world when it snows. Though I’m not sure how long the quiet lasted, I know it’s a memory now burned in my brain, like the smell of my Dad’s bread baking.

The silence finally broke to sounds of joy: shrieks of delight and amazement from neighbors young and old, loud laughter and shouts from friends gathering great handfuls of snow for snowball fights.

As I looked to the streetlights to see the snow, I remembered dozens of nights from my childhood where I strained to see snowflakes in a beam of light, promising the universe whatever it wanted as long as I could have a snow day. PLEASE!

Funny how two inches of Southern snow can take a girl all the way back home.