Last Saturday, we lost Clarence Clemons, the dynamic saxophonist and partner in musical crime for Bruce Springsteen and The E Street Band, far too soon.

If you haven’t yet done it, read the beautiful tribute, Bloodbrother: Clarence Clemons, 1942-2011, David Remnick wrote for The New Yorker.

“His horn gave the band its sound of highway loneliness, its magnificent heart. And his huge presence on stage was an anchor for Springsteen, especially when Bruce was younger, scrawny, and so feral, so unleashed, that you thought that he could fall down dead in a pool of sweat at any moment. At the brink of exhaustion and collapse, Springsteen could always lean on his enormous and reliable friend—an emblematic image that is the cover of “Born to Run.” 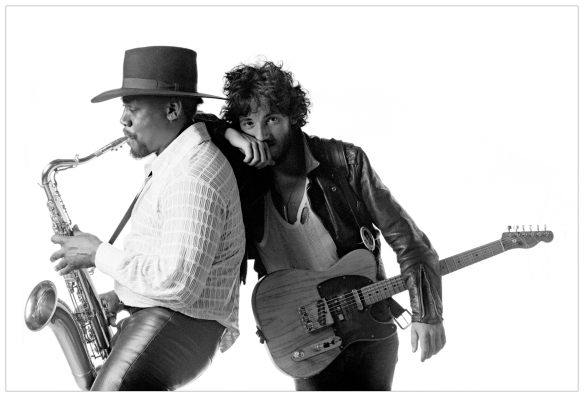 As a New Jersey native, I came to Bruce Springsteen and The E Street Band early in life. It’s no exaggeration to say that my early definitions and vision of what it meant to be in love, to struggle, to long, to want the hell out of my hometown, were formed listening to those haunting, heroic albums – devouring lyrics and singing to the breaking point of my voice, eyes closed, arms outstretched.

That Clarence Clemons could, through his saxophone, breathe longing, loss and triumph into a song, into people’s consciousness and souls, was his gift – and one that thankfully lives on.

To me, there was always something so heartbreakingly beautiful about the bond between “The Boss” and “The Big Man.” That their relationship broke racial barriers is an incidental, albeit important, social statement. That their musical and physical chemistry was the stuff of other legendary partnerships – Jagger/Richards, Plant/Page, Lennon/McCartney, Simon/Garfunkel – minus the breakdowns and breakups, attests to their mutual respect that withstands life and death.

It is that elusive, intangible connection between these two men that fascinates and moves me. Their “brotherhood,” a term so cliché and overwrought with emotion, it has nearly ceased having meaning. But you need only watch them together onstage – Springsteen leaning into Clemons as the sounds of his saxophone fill a stadium – Clemons with arms raised beside Bruce as he sings his disciples into ecstatic epiphany – to understand what beauty do love and friendship and music make among men.

3 responses to “Love song for Clarence”