Last week, a 14 year old girl and her Mom; a Southern-born, Indian-bred self proclaimed “fat, hairy, brown femme-trans-masculine queer bodied magic pony;” an engineer/activist transgender woman; and a critically acclaimed actress, African American transgender woman made me cry and made me proud all in one night.

Sera, the 14 year old, was born Seth. Every night, starting at age three, she asked her Mom, Amy, “When is God going to make me a girl?”

Over the course of several years, Seth began being Sera…at home. By the time Seth was in fourth grade, he began transitioning at school, growing out his hair, dressing more femininely. By sixth grade, Sera was fully transitioned at school.

That transition, as you might imagine, was not always readily accepted. Sera was and is bullied…by kids and even parents.

Her Mom always told her, “You are an individual.”

And she is. She’s a bubbly 14 year old girl, talking excitedly with her hands in front of 500 people. She and her Mom both seem nervous, and utterly brave.

At the end of their tag teamed speech, Sera addressed us as if we were all going through what she has been going through, as if our mere presence in that auditorium meant that we understood, as if we were all still 14. And I realized that we all do understand, because no matter how old we are, if we think back, we can tap into that feeling of insecurity and uncertainty that comes with being a teenager, that overwhelming desire to belong, that unbelievable angst and longing for something you cannot name.

Anne Lamott wrote, “This is a difficult country to look different in…and if you are too skinny or too tall or dark or weird or short or frizzy or homely or poor or nearsighted, you get crucified. I did.”

Whether you think back to your teenage years and acknowledge that you were the bully, the target, the popular kid, the fringe kid, or the invisible kid, you know now (at least I hope with all of my bleeding heart that you do) that we are all much more alike than we are different.

After the speeches and the candlelight vigil, there was an after party where the keynote speaker and Orange Is The New Black star, Laverne Cox graciously posed for photographs with party-goers. And when the music got started (courtesy of Megan Jean and The KFB), the kids from We Are Family started dancing. Laverne quickly joined them, and everything, the room, the air, the light, just got brighter and lighter and together and better. And I thought to myself, “God, we all need to dance more,” because remember what it feels like to be in your body and move and feel free? It was music and dancing and laughter and people being exactly who they are.

And it was miraculous. 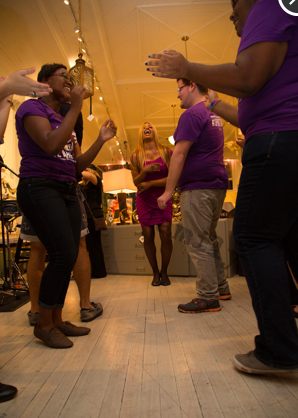 Sera and her Mom weren’t at the after party, because after all, she’s only 14, but this is what she left us, her fellow, forever 14 year olds, with:

“People are going to say to you that ‘it gets better’ and you’re not going to believe them. And the truth is, it hasn’t gotten better for me yet, but I promise to come back and tell you guys when it does.”

8 thoughts on “We Are Family”